Heroes Against Darkness vs. D&D

It's no secret that Heroes Against Darkness is firmly rooted in the traditions and mechanics of all editions of D&D. When describing the game, I specifically refer to it as a 'd20' system because most of the mechanics in the game (attacks and ability tests) are much the same as those that were codified in D&D 3rd Edition.

But, I have a problem. And that problem is how to define how Heroes Against Darkness relates to D&D and how to describe the game. You see, Heroes Against Darkness has similarities with each of the different editions of D&D, but it also has differences with each edition (some fundamental), and it also extends outside of the traditional D&D feature-set. 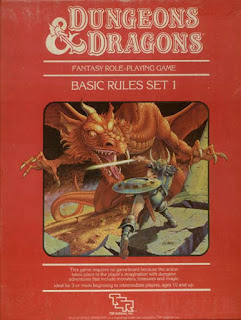 As a whole, Heroes Against Darkness is probably closest to Basic D&D. However, even though the game has the same simplicity of presentation as Basic, it really doesn't share much in the way of mechanics, with just a few common elements:
• Simple character creation (no customizable feats or proficiencies).

The biggest similarity between Heroes Against Darkness and AD&D is:
• Separation of class and race. 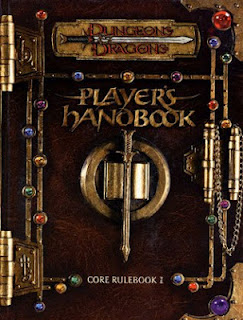 The 3rd edition of D&D was the first to unify the mechanics of the system so that the d20 was used for attacks and ability tests:
• Unified d20 mechanics for all sub-systems (combat, ability tests).
• Ascending Armor Class. 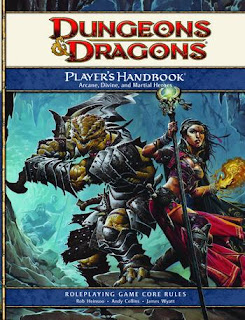 D&D 4th Edition introduced a number of innovations that I also employ in Heroes Against Darkness:
• +1 per level progression of attacks is based on inherent underlying mechanics, rather than arbitrary tables.
• Defenses instead of saving throws.
• Codification of attack powers (instead of disparate feats and class features).
• Unified Experience Point progression for all classes.

As you can see, Heroes Against Darkness borrows from both old and new editions of D&D. And alongside all of this commonality with D&D, the game's entire magic system is more closely related to Magic: The Gathering, rather than D&D! 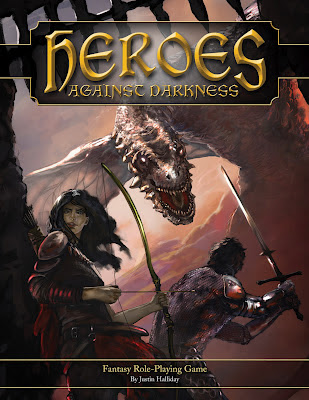 When I talk about the game, I am tempted to categorize the game as a retro-clone, because of its similarity to various earlier versions of D&D. But retro-clones are more closely based on the corresponding edition that they're cloned from, and Heroes Against Darkness (happily) cannot point to a single earlier edition that it clones.

I also find it tempting to describe the game as rules-lite, because it does have comparatively few rules for such a fully-featured system. But rules-lite games, such as Dungeon World Hack, are often more abstract and have rulesets that fit in pamphlets, not in tomes. 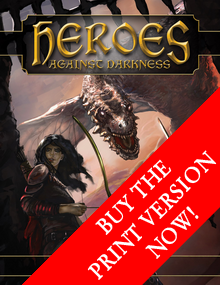